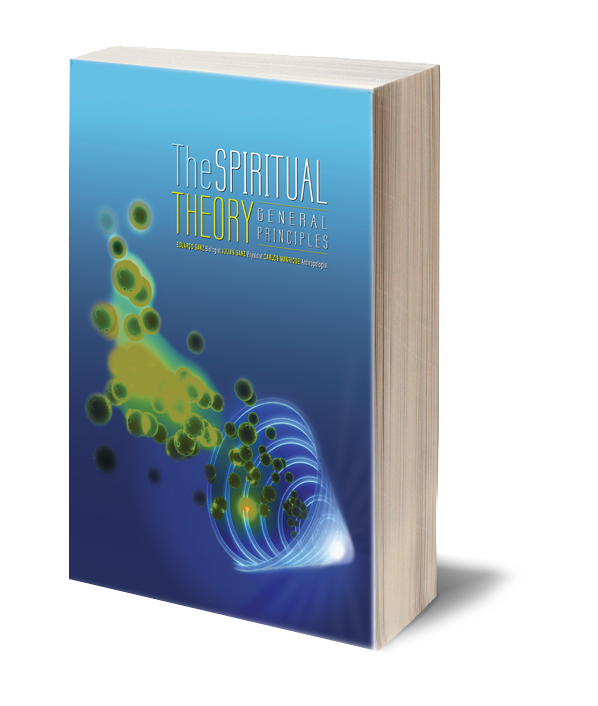 ABOUT THE SPIRITUAL THEORY

“We are spiritual beings living temporarily attached to a physical body and evolving to greatest states of harmony.”

This is probably the general conclusion emerging from The Spiritual Theory (ST), but in the process of explaining this conclusion, ST presents a detailed description of a wide variety of fascinating topics; they range from the creation of the spirit by The Creator and the nature of the different Vibrational Dimensions, to the origin of matter and the universe; from the role of the spirit in the origin and evolution of biological life to the mechanism of  incarnation, the path of information from spirit to matter and vice versa, and many more.

ST is a scientific proposal that looks to explain the existence of the spirit, the Spiritual Dimension, and how they are related with the material world. This theory has been built based on facts about spiritual phenomena acquired initially nearly one hundred and fifty years ago by Allan Kardec and, later on, further developed by the Basilio Scientific School Association (BSSA), the school at which the authors came into contact with the spiritual phenomena. Both sources have been fundamental to the establishment of Spiritual Science. In both works the use of mediumship or channeling has been crucial to access the Spiritual Dimension, a level of existence that is located way beyond the limits of the Material Dimension, hence, not accessible through conventional methods of scientific research.

Beside the fundamental role spiritual knowledge plays in our existence and the future of humanity, Spiritual Science has not reached the level of scientific progress acquired by formal sciences and has remained limited to spiritist schools. However, as a scientific truth it can no longer stay out of this path since spiritual knowledge represents the other half of the story about who we are, why we are here, and what we are evolving into, among other factors.

ST is an attempt to build the bridge to connect formal science with Spiritual Science. If confirmed, the impact on our existence and the future of humankind will be of unprecedented proportions. We will witness the rise of a new era, with a human race fully aware of its spiritual origin and living its physical life fully conscious of its spiritual responsibilities, improving the harmony of its attributes, and accelerating the pace of social evolution.

The authors, a biologist, a physicist, and an anthropologist, assume the challenge to merge their areas of expertise with their extensive knowledge in Spiritual Science. After more than 25 years studying spiritual phenomena and the last ten dedicated to analyzing, discussing, and reevaluating the basis for a theory about it, they finally published The Spiritual Theory, a proposal that, in their own words . . .

. . . connects the dots to make visible the fine relation between spirit and matter at every level of complexity; from the Fundamental Particles of Matter to atoms, molecules, cells and organisms; from the Spiritual Dimension to the Material Dimension; from incarnation to reincarnation; from spiritual evolution to biological evolution and so on.

This book not only describes our past as free spiritual beings before incarnation and our present as incarnated spirits but also presents an extraordinary and optimistic prediction of our future as a society and the future of the universe and matter itself.

The Spiritual Theory is divided in 2 major sections: Section I or The Spiritual Era and Section 2 or The Material Era.

Chapter 4 describes some concepts about The Creator, including the breathless experience of those mediums who have had the fascinating experience of describing His presence. Chapters 5 to 7 include a description of the events related to the loss of harmony of a gross mass of spirits, their fall to a lower vibrational dimension away from The Creator, and the catastrophic consequences that led to the fractioning of an uncountable number of them. It was precisely due to the spiritual fragmentation that Spiritual Particles originated, opening the way for the existence of matter and the universe itself. These seven chapters will give the reader an idea about how we came into existence as spiritual beings and why we are now living a life hovering between love and hate, progress and destruction.

This first section depicts the events previous to the existence of matter and the universe and holds the key issues to understand what came later in the second section.

Chapters 10 to 14 focus on describing: how and why all material structures of complexity—from biochemical systems to living cells—are inevitably associated with a spiritual component; where the intelligence of matter comes from; and how the fate of matter is determined by the spiritual component. It tells of a journey of physico-spiritual evolution that ends in chapter 14 with the appearance of Homo sapiens and the incarnation of spiritual units like us. Chapters 15 and 16 present a detailed description of The Mind and how this spiritual organ—key in the communication between spirit and matter—is formed along the evolutionary scale.

Chapter 17 explains the nature of the fluidic link, a structure responsible for the temporal union between spirit and matter; while chapter 18 describes the spiritual vibrational structure known as peribody. Chapter 19 helps us to understand better the real nature of this rare condition named mediumship that some people have and that allows them to detect the spiritual dimension; the final chapter gives us a clue about how inside us resides a compass to guide us in making the right decisions—something necessary to acquire better levels of spiritual harmony.

With 209 figures that greatly contribute to improving the level of comprehension of the different topics presented, 233 footnotes and references, and a glossary with 71 entries of words and concepts, The Spiritual Theory constitutes a real challenge to main stream science and a delight for the followers of spiritism around the world.

Although this is a book written with the intention to present a formal theory about spiritual phenomena, it can be at the reach of anybody interested in this subject. For those with no knowledge in the spiritual science, the authors have created a Free Online Course in Spiritual Theory where those interested can learn the basic concepts necessary to better understand this proposal.

Buy now from Barnes and Noble